← more from
Temporary Whatever 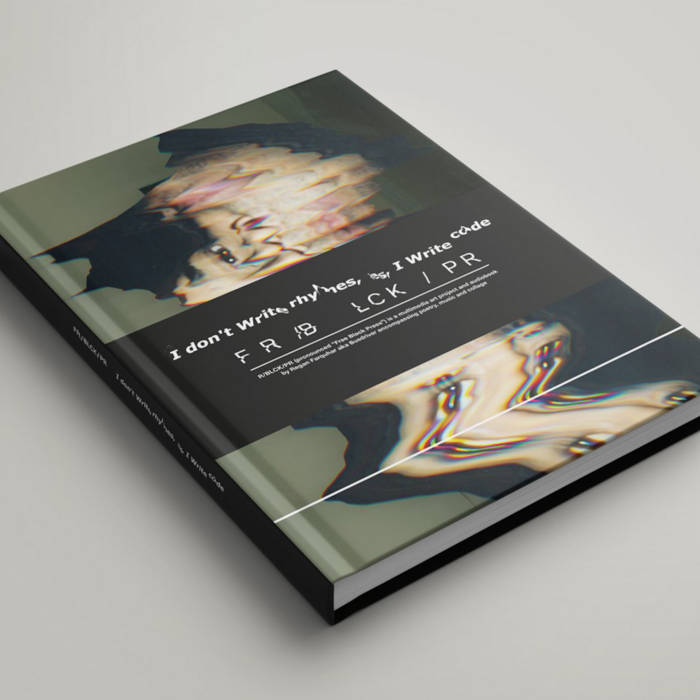 The FR/BLCK/PR (pronounced "Free Black Press”) debut, “I Don’t Write Rhymes, I Write Code”, is a multimedia art project and audiobook by Regan Farquhar encompassing poetry, music and collage. “I Don’t Write Rhymes, I Write Code” is at once a scathing indictment of Western power and a sprawling celebration of raw immediacy, memory and the tradition of homespun craft as a practicum within black worlds. Given his life as a language artist within the hip-hop and beat tradition via his more popular endeavour, the poetry and essays that make up the book all act as a licence for metaphor; tacitly bridging the jazz addled literary forms informed by Harlem Renaissance writers and Caribbean Pan-Africanists to the post-iPhone hyper atomisation of now in service of agency.

Those familiar will find it as an extension of the ‘Free Black Radio', which ran from 2015-2017 exclusively on Soundcloud and remains a creative peak for Farquhar.

“The book is essentially a recipe for my own cathartic chaos,” he explains. “It’s window-dressing to a benevolent madness that manages to solidify into hard science midway to the end”.

The visual dimension of the project was encouraged by his friend and collaborator Flying Lotus and in the end expounds on reoccurring themes within the book such as black unity and potentiality (‘Athletes and Entertainers’, directed by Dylan Tull and Regan plus edited by the Buttress), the terrors of future tech (‘Notebook’, directed by Mattia Fiumani and written by Regan), mental illness and isolation (‘Paris to LA’, directed by A Film by Black Daughters), inherited trauma (‘Dancing Since 3’, directed by WC Tank and Regan), and the need to submit to a larger concept in order to give your struggle meaning.

“Rules melt away as quickly as they are established in this world within a world.”

Still, the work's effectiveness is in the summation of the mediums and their complimentary effects. The process of compiling found sounds, images, language and ideas in service of sacralizing one’s immediate world draws on the tradition of assemblage as a method of self-actualization. This tie-in to tradition rather than a Dadaist or hip-hop modality adorns the entire work with an unannounced spirituality; as if the work was made with no audience in mind, as if the work was made to secure one's humanity rather than entertain.

“What comes off as surrealist is really folk ritual in practice, or a social defense mechanism spun into craft or simply... a troubled mind figuring some shit out. All in accord with the kitchen sink creatively of the black women who made my world early on.”

Busdriver is a rap artist/producer, pillar of the Los Angeles underground hip-hop community and veteran of the Project Blowed scene (the legendary freestyle/battle space co-founded by Aceyalone from Freestyle Fellowship and Abstract Rude in 1994). He has released 13 studio albums and mixtapes since 1999 on iconic labels such as Epitaph, Anti-, Mush Records and Big Dada, collaborating with Daedelus, Prefuse 73, Boom Bip, Modeselektor, Open Mike Eagle and Anderson .Paak to name but a few. In 2008 Busdriver featured in “This is the Life” - the award-winning documentary film directed by Ava DuVernay, which chronicles the aforementioned alternative hip hop movement that flourished in 1990s Los Angeles and its legendary hub: the Good Life Cafe. In 2017 he appeared on Flying Lotus' directorial debut feature film “Kuso” and he performed lead vocals on the Flying Lotus track ‘Ain’t No Coming Back’ - from the compilation “Brainfeeder X” (2018) - alongside Thundercat, Kamasi Washington, Justin Brown and Brandon Coleman.

Bandcamp Daily  your guide to the world of Bandcamp